Reiko Nagase is the race queen featured in the Ridge Racer series, as one of the girls holding cards before the start of each race, and appearing in the FMV cutscenes. An unnamed girl resembling Reiko first appeared in the real-time arcade intro for 1995's Rave Racer, but she was officially reintroduced (and named) a year later in Rage Racer. Whether the Rave Racer girl is supposed to be Reiko is unknown, but Reiko's Ridge Racer 6 outfit bears a resemblance to the Rave Racer one.

In 1998's Ridge Racer Type 4, she was given more prominence, as the opening animation, which used a Kimara Lovelace song, was a short story starring her, and introduced a redesign to her 3D model by Kei Yoshimizu. This is when Namco started giving more exposure to the character, heavily using her image to promote the game.

Her story as depicted in Ridge Racer Type 4's intro was, when she was going to walk all the way to the city, where at the same time, a Real Racing Roots '99 street race was in progress, and upon reaching the tunnel, one of her hels broke, forcing her to walk barefoot, and then moments later, she heard the sound of engines approaching, and the Racing Team Solvalou driver in the Assoluto Bisonte, who was leading the race, saw her asking for a ride and decided to give pick her up whilst finishing the race.

Also on Type 4, she is known to have a cameo appearance as having sent a fax mail to Pac Racing Club, but due to her profession, this was kept as a secret (only gained through coming 1st place overall up to Phantomile).

While still appearing in other games, Namco decided to replace Reiko in 2000's Ridge Racer V with newcomer Ai Fukami. In 2001, Namco created an image girl for their Namco Sports line named Hitomi Yoshino, and while the Ridge Racer series doesn't belong to that line she was featured in a Ridge Racer trailer shown in the 2002 edition of the E3.

The PSP titles saw the return of Reiko Nagase after her absence in Ridge Racer V, now with reworked CGI and new outfit. In the first PSP title, she's not only featured in the game's intro, but also the ending credits.

In Ridge Racer 6, she makes a return with an easter egg in the form of hidden messages, obtainable in certain points of the game.

Afterwards, in Ridge Racer 7, she was given even more backstory. At this point, she now works in the Universal Federation of Ridge Racing Association (abbreviated as UFRA), Ridge State GP's governing body, as its spokesperson.

In subsequent releases, she reprises her role as a race queen, except for Ridge Racer Draw & Drift , where she acts as a race manager. 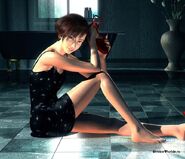 Add a photo to this gallery

She has been featured in many products licensed by Namco, including the first and sixth wave of Namco Gals gashapon.

Multiple characters named Kei Nagase, who all bear a notable resemblance to Reiko, have appeared in the Ace Combat series, most notably Ace Combat 5: The Unsung War. The Kei Nagase that appeared in Ace Combat 2 was explicitly stated to be Reiko's younger sister.[1]

Retrieved from "https://ridgeracer.fandom.com/wiki/Reiko_Nagase?oldid=9147"
Community content is available under CC-BY-SA unless otherwise noted.