"The race is just the beginning" - back cover tag line.

R: Racing Evolution, known as R: Racing in Europe, is a 2003 racing video game developed and published by Namco for the Nintendo Game Cube, PlayStation 2 and Xbox home systems. Considered as a spin-off of the Ridge Racer series, this is the first game to take a serious driving simulator approach, marking a departure from the stylish arcade-driving action, featuring real life licensed cars of automakers like Honda, Acura, Lotus, Dodge and some more. In addition, R: Racing Evolution includes a story-based mode starring Rena Hayami.

Conceived by a development team comprising members of the Ridge Racer series and Namco's MotoGP, the driving mechanics of R: Racing Evolution try to focus more on the real-life physics of motorsport cars. Mechanics such as acceleration and braking in tight curves are now mandatory, leaving behind the arcade-friendly style that defines Ridge Racer. To help newcomers to the series and casual gamers, the game offers a default brake assist feature.

Advancement in controller technology from the sixth console generation meant that the intensity of acceleration and braking could be controlled with the trigger buttons of the Xbox and Gamecube controllers, while the DualShock 2 made use of the face buttons with its proprietary Pressure Sensitive technology.

A prominent feature in this game, when competing with the AI, is the "Pressure Meter". This measures the psychological pressure inflicted upon a car in front of the player's. The closer the distance, the quicker the Pressure Meter would start filling up. The affected competitor initiates a dialogue. When it's completely full, it starts to flash, indicating that the car ahead will make a critical mistake, paving the way for passing the out-of-control opponent.

Multifunction Display is a system that updates the player about the race condition in real time. Allows players to do car settings adjustments while racing. The displayed information depends of the car and the course of the race. Using the directional pad, the player can adjust settings of brake, steering, stabilizers and center LSD only in certain cars. The automobiles also can be adjusted in the Setting option through the menus, feature additional settings as final drive ratio, ABS, car weight, maximum HP/Torque, etc. These changes will be reflected in the races, affecting acceleration, speed and/or handling.

By winning and clear races or drive skillfully, the player can get RP (Reward Points) in the Racing Life, Event Challenge and VS modes. RP are necessary to buy new and better cars, tune-up owned cars to improve their performance, and to get into the racing events of Event Challenge.

Racing life is a fixed story-driven mode that lets you play as Rena, a young Japanese woman who goes from driving ambulances to the top of the professional racing circuit. Racing Life is broken up into 14 chapters, and each one is separated by a cutscene that advances the story.

Rena Hayami is introduced as a Japanese ambulance driver living in a nondescript Western country. On one afternoon, she responds to an accident at a racetrack. Pressed for time, Rena pushes her driving skills to the limit in order to deliver the injured racer to the hospital. Along for the ride with his injured team member, the former racing engineer and now team manager Stephan Garnier is impressed enough to offer Rena a chance to become a racecar driver herself. She accepts and joins Stephan's team, oblivious to the fact that the team is sponsored by a shadowy corporation called G.V.I., which determines the placing of the racers in the race, as shown in one of the chapters, when Rena (the player) is forced to place second, not first. At first, Rena benefits from the company's influence and is given equipment and opportunities to race in major events. However, she quickly develops a bitter rivalry with independent veteran racer Gina Cavalli. It is later revealed that Gina despises G.V.I., and her contempt for the company spills over to Rena, whom Gina considers to be their pawn. Later, when the first rally race chapter was introduced, Stephan's team mechanic Eddie is introduced, and it is revealed that Stephan was once a very good team manager, until an accident occurred involving one of his racers, he was forced to go into the dark. Towards the end of Rena's rookie season, Eddie comes up with a plan to leave G.V.I. with Stephan and Rena. They form a new team without G.V.I.'s influence and Gina finds new respect for Rena and the two become friends while continuing their rivalry on the racetrack.

This is the second main mode of this game, when players can attend various race events, buy and tune cars.

In this option the players can view cars purchased or achieved through Racing Life and Event Challenge modes. Also, you can see replays saved in the memory card or the cutscenes of Racing Life.

After a hiatus in Ridge Racer V, the classic Namco Sound Team returns to compose the music in this game. The soundtrack was composed by Yuu Miyake, Hiroshi Okubo, Akitaka Tohyama, Koji Nakagawa, and Satoru Kosaki. The rhythms of the songs ranging from techno, electro house and trance. R: Racing Evolution Direct Audio was released in a 2-CD pack. This is the track list:

GameRankings holds 67.78% (PS2), 69.69% (XB) and 70.66% (GC), while Metacritic has 66 of 100 for the PlayStation 2 and 67 for the Game Cube and Xbox versions. Nintendo Power mentioned in his review: "Taking a more realistic approach to driving than some adrenaline-pumping racers, Evolution may seem slow at first, but the challenge increases as the game continues". (Feb 2004, p.148). IGN gave a mixed review: "It doesn't feature nearly as many cars or tracks. Control is stiff and the sensation of speed comparatively slow. And it's certainly not as fast and arcade-cool as Ridge Racer."

Main critics were regarding the simulator/arcade split that failed to convince fans of both game styles, and the null sense of speed. The plot of Racing Life mode was rated as interesting during the first chapters, waiting for know what follows in the career of Rena and her rivalry with Gina. Event Challenges were praised for take the most of the game with a good variety of competitions. Graphically the game was within the average of that generation, with a decent vehicle and circuit designs. Automobiles tune-ups and engine modifications were well received because actually changes control of the cars. The brake-assistant system was targeted as too amicable, decreasing the overall difficulty of the game, so experienced gamers should turn it off. Music and sound obtained a light acceptance, where the in-race voices and car sounds could be better. 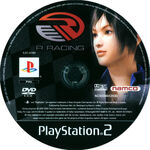 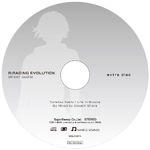 Rena and Gina
Add a photo to this gallery
Retrieved from "https://ridgeracer.fandom.com/wiki/R:_Racing_Evolution?oldid=8315"
Community content is available under CC-BY-SA unless otherwise noted.