The Danver Hijack is a truck manufactured by Lizard and later Danver. Debuted as Lizard model in Rage Racer, it appears under Danver name for the first time in Ridge Racer 2 as a special car.

In Rage Racer, the car debuts as Lizard Hijack, featuring a NASCAR truck style bodywork. Power comes from a 5.0 liter overhead valve V8 engine mated to a 5-speed transmission, with an optional supercharger kit available as a part of its class-up tune.

The Grade 5 specification may imply that its larger, more powerful engine is now mounted on the bed as opposed to the car's front end, although it can also imply a twin-engine configuration.

Power comes courtesy from a selection of engines depending on its class, all of which are mated to a 5-speed transmission. It's the best handling car in Class 4 of Rage Racer.

"The HIJACK can handle all kinds of terrain. A genuine sports truck that has competed in many drag races in the US, it is equipped with a 6-litre V10 engine and a race-spec bodykit. A true next-generation monster truck."
―Ridge Racer 2 (PSP) machine profile.

The Hijack only appears as a special machine in Ridge Racer 2 (PSP). The Hijack is unlocked after you beat it twice in the Hijack tour across Shuttleloop Highway in both forward and reverse versions.

The Hijack is a big oversized super truck built by Danver, powered by a 6.0 litre V10. It features quite an exotically placed exhaust, mounted on its bed, and sports number 21. The trucks color is white, with many advertisements on the body (Namco, Dig Dug, etc).

Despite its high top speed, being the second fastest car in the "Special 1" category at 382 km/h, it has relatively weak acceleration and will require skillful control to master, as even with the lightest inputs, the car will drift rather violently and swing itself with an extreme angle.

"The HIJACK was developed by DANVER with the concept in mind of being able to "conquer any and all terrain". The HIJACK accomplishes this feat with flying colors, and does it with breathtaking comfort. Riding in it feels like going for a cruise in a luxury sedan. All internals, including the engine and suspension, were redesigned from the ground up, making this a new breed of truck."
―Ridge Racer 6 description of Class 2 Hijack.

"A more powerful HIJACK fitted with a 6-liter V10 engine and a race-spec bodykit. It produces tremendous amounts of torque, and behaves like a rampaging bronco. A true monster."
―Ridge Racer 6 description of Class 4 Hijack.

The Hijack reappeared in Ridge Racer 6 as Class 2 and Class 4 machine. It roughly resembles the Chevrolet SSR, or perhaps the Dodge Ram SRT-10, as both cars are round-shaped pickup trucks equipped with big and powerful engines. The regular version of the car features active aerodynamics, unusual for a pick-up truck, while the Class 4 version of the car features a similar wide body kit, a large rear wing, a large air scoop on the hood and a bed-mounted exhaust from its Ridge Racer 2 (PSP) model.

"The Hijack has successfully blown away its pickup truck image to become one of the most popular sports trucks. This durable, easy to customize, low price machine can run on any surfance, on or off the road, and now competes in many race events. A groundbreaking race machine."
―Ridge Racer 7 description.

The Hijack returned in Ridge Racer 7, now a Category 2 machine. A special Complete Machine variant is also obtainable by winning the Hijack Duel, similar in appearance to Class 4 Hijack in the previous game.

In terms of performance, this car excels in Ultimate Charge. Acceleration performance is not so good, but can be offset with Zolgear tuning kits.

In Ridge Racer 3D, the Hijack was renamed the HJ6000, presumably signifying that the engine displacement was increased from 5,000 cc to 6,000 cc. The HJ6000 retains the same Dynamic-type handling, meaning players will expect the car to be wildly swung around corners and thus requires a lot of control to regain grip.

The HJ6000 name is also used in this game, with appearance taken from Ridge Racer 7 version of the car.

Add a photo to this gallery 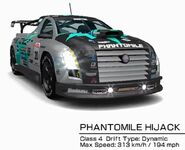 Shootaway Hijack
Add a photo to this gallery

Rear view
Add a photo to this gallery

Retrieved from "https://ridgeracer.fandom.com/wiki/Danver_Hijack?oldid=11396"
Community content is available under CC-BY-SA unless otherwise noted.